Maximum players on a team
24 players

○ A coin toss will determine which team gets the ball first. That team will begin possession of the ball on the 40-yard line with their choice of hash
○ A whistle will begin each game
○ Each game lasts 25 minutes with a running clock (Overtime in Pool Play)
● If a team scores a touchdown with no time remaining on the clock, they DO NOT get to attempt their extra point
○ The official will declare when the clock is under 2 minutes
○ The clock never stops, with the exception of an injury or referee timeout
○ A whistle will end each game
○ The referees will keep the official score and time on the field for each game
○ Soft Helmets and mouthguards must be worn correctly at all times by all players except the QB. If a player does not have a helmet they cannot participate until they do.

○ Offense always starts on the 40-yard line with their choice of the hash. After any change of possession
○ All snaps at the 40-yard line must be off the QB-TEE (No Shotgun). Upon gaining a yard or more, QB may take a shotgun off QB-TEE
○ Offense has three (3) downs to gain a first down. First down markers will be at the 25, and 10-yard lines
○ Once inside the 10-yard line, the offense has 3 downs to score a touchdown

○ The first person to control the football off the QB-Tee is the QB. The QB is never eligible to run
○ The offense may run the ball as many times as they want on any down during the game; with the exception of overtime. The QB is allowed to make one exchange (ex. Pass, handoff or toss). No toss passes, reverses or hook and ladder
○ Defensive players cannot cross the line on a run play until the quarterback hands the ball off to the RB
○ Quarterback can NEVER run the ball
○ After the offense scores a touchdown, they have the option of going for 1 point from the 5-yard line, or going for 2 points from the 10-yard line. Offense chooses hash for ball placement. If the coach doesn’t respond to the official on which yard-line, the official will place the ball on the 5-yard line to go for 1 point. Once this decision is made, coaches cannot overturn this decision

○ There will be one offensive coach allowed on the field at any time and THREE (3) active athletes behind him only. (One warning then delay of game penalty)
○ The coach must be positioned behind the offensive huddle
○ Coaches are not allowed to challenge any official ruling
○ Remaining team coaches can work from the sidelines
○ NO defensive coaches allowed on the field
○ Coaches will be given 1 sideline warning during play. Second warning will result in a 10-yard penalty or half the distance to the goal. Third warning will result in coach’s ejection
○ Any form of cheating qualifies for automatic team disqualification at the tournament!

○ NO BLITZING ALLOWED in the ENTIRE game (INCLUDING overtime). If a team blitz’s, they will be penalized 15 yards, unsportsman
○ NO blocking
○ Blocking will result in a loss of down, return to the previous spot
○ Face guarding is allowed
○ Ball carrier is legally down when touched below the neck with one hand or the ball carrier’s elbow/knee, or the football touches the ground. A defender CAN leave his feet to make a tag. The offensive player can leave his feet also
○ Fumbles (Including snap) are dead balls at the spot with the last team in control retaining possession at the spot
○ Offensive team will have 25 seconds to put the ball into play. Delay of game is a loss of down
○ The offensive team is responsible for retrieving and returning the ball to the official. The clock does not stop, and any delay of the offense in retrieving and returning the ball to the official will result in delay of game
○ Defensive pass interference will result in a 15-yard penalty and an automatic first down. Defensive holding will result in a 10-yard penalty and repeat the down
○ Offensive pass interference will result in a return to the previous spot plus a loss of down
○ The QB is allowed 4.0 seconds to throw the ball. Referees will stop play if 4.0 seconds is surpassed, which will result in a loss of down
○ An interception will result in an immediate stoppage of play and a change of possession with the interception team gaining possession at the 30-yard line. If an unsportsman penalty is given to the interception team, they will be penalized 10 yards and will start from the 40-yard line
○ Excessive celebration is not allowed and will not be tolerated. At the discretion of the referee, if a team is penalized for excessively celebrating or clearing of the sideline, the result is an unsportsmanlike penalty and a loss of down
○ A game cannot end on a defensive penalty. If this occurs, the offense will have an untimed down if time has expired
○ The offense (wide receivers) has to line up outside the tackle box, and one receiver has to be on the line on each side. If not, the offense will be penalized illegal formation and a loss of down
○ Fighting will not be tolerated. If a player throws a punch, he is ejected immediately and CANNOT return to the game. If players are involved in
pushing or shoving, they may be ejected immediately from the game at
the referees’ discretion. If a second incident occurs with the same
player(s), they will be ejected from the tournament in its entirety. If a
team’s bench clears, resulting in a fight, both of the teams are ejected,
resulting in a forfeit. The referee has the right to throw out any player,
players, or team out of the game. The GIU 7’s Invitational staff have the
right in extreme cases to eject players, coaches, teams, and by-standers
of any tournament and they will have to leave the facility immediately. A
referee can also give a 15-yard unsportsmanlike penalty

○ GIU 7 Invitationals staff WILL NOT overturn a referee’s call!

○ Games in BRACKET PLAY (SINGLE-ELIMINATION) that end in a tie will go to a tiebreaker. There will be a coin toss at the beginning of the tiebreaker with the home team calling the toss. The winner will choose to be on either offense or defense
○ Each team will have 2 plays from the QB-tee from the 10-yard line, choice of hash. If you score, you receive the standard 6 points
○ There is NO running in overtime. All plays MUST be a pass
○ If the offense scores, then they MUST choose to go for 1 point from the 5-yard line, or 2 points from the 10-yard line. If the coach doesn’t respond
to the official on which yard-line, the official will place the ball on the 5-yard line to go for 1 point. Once this decision is made, coaches cannot
overturn this decision
○ The opposing team gets the same opportunity to win
○ If neither team scores or it still ends as a tie, we will flip the coin again then back to the standard longest passing yard from the 40-yard line. There is no running allowed in the longest yard situations
○ The team with the most yards will be declared the winner of the tiebreaker and will add 1 point to the final score
○ If there is no completion, or the deepest completion is equal, the tiebreaker will be repeated with the team that lost the initial coin toss making the choice to either take offense or defense.
○ This format will be repeated until a clear winner is declared
○ This tiebreaker format will be used in SINGLE-ELIMINATION GAMES ONLY.

BRACKET SEEDING WILL BE DETERMINED BY:

● Wins/losses, points scored, and point differential. If after these determinations there is still a tie, the system will automatically do a coin flip to determine team seeding

○ Offensive touchdown = 6 points. After the touchdown, the team MUST elect to go for 1 point from the 5-yard line or 2 points from the 10-yard line. 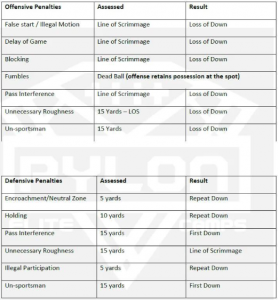 PLEASE HELP US KEEP OUR FIELDS CLEAN; EACH TEAM IS RESPONSIBLE FOR
CLEAN UP OF WATER BOTTLES AND TRASH ON THEIR OWN SIDELINES. THANK
YOU!!!